Max has had a rough few years, he is a 20-year-old Macaw from the Hyacinth Haven Bird Sanctuary in the Western Cape, who got his beak damaged on two separate altercations with other Macaws. The first altercation damaged his top beak, and in the second, it broke off completely, and with only his lower beak left, Max was unable to eat solid foods. His owner, Trevor Glover, who established the sanctuary, took Max to Dr Brendan Tindall at the Robberg Veterinary Clinic in Plettenberg Bay for treatment and evaluation, where they managed to get him to start eating soft foods, but without the top part of the beak to keep the bottom part in check, it continued to grow straight out, eventually becoming longer than his tongue, preventing him from reaching his food, so they had to cut it back again. 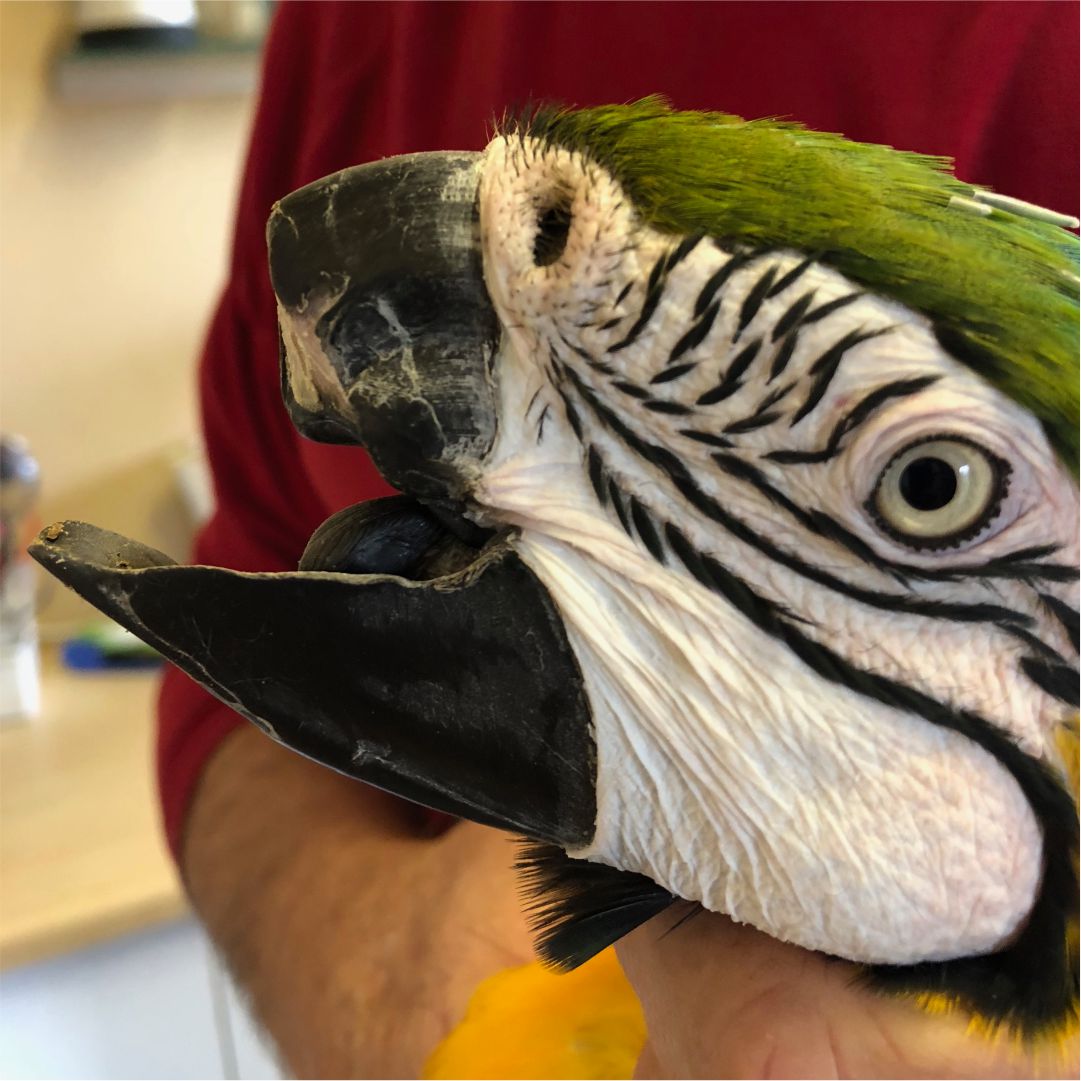 Max was taken to the Onderstepoort Veterinary Academic Hospital (OVAH) for a CT scan to check if there was enough remaining beak left to attach a prosthesis, but the detail of Onderstepoort’s CT scanner was not enough to determine this. Luckily arrangements could be made with Eugene Marais Radiology where Dr. Craig Muller was able to do a highly detailed scan that showed fitting a prosthetic would be possible. 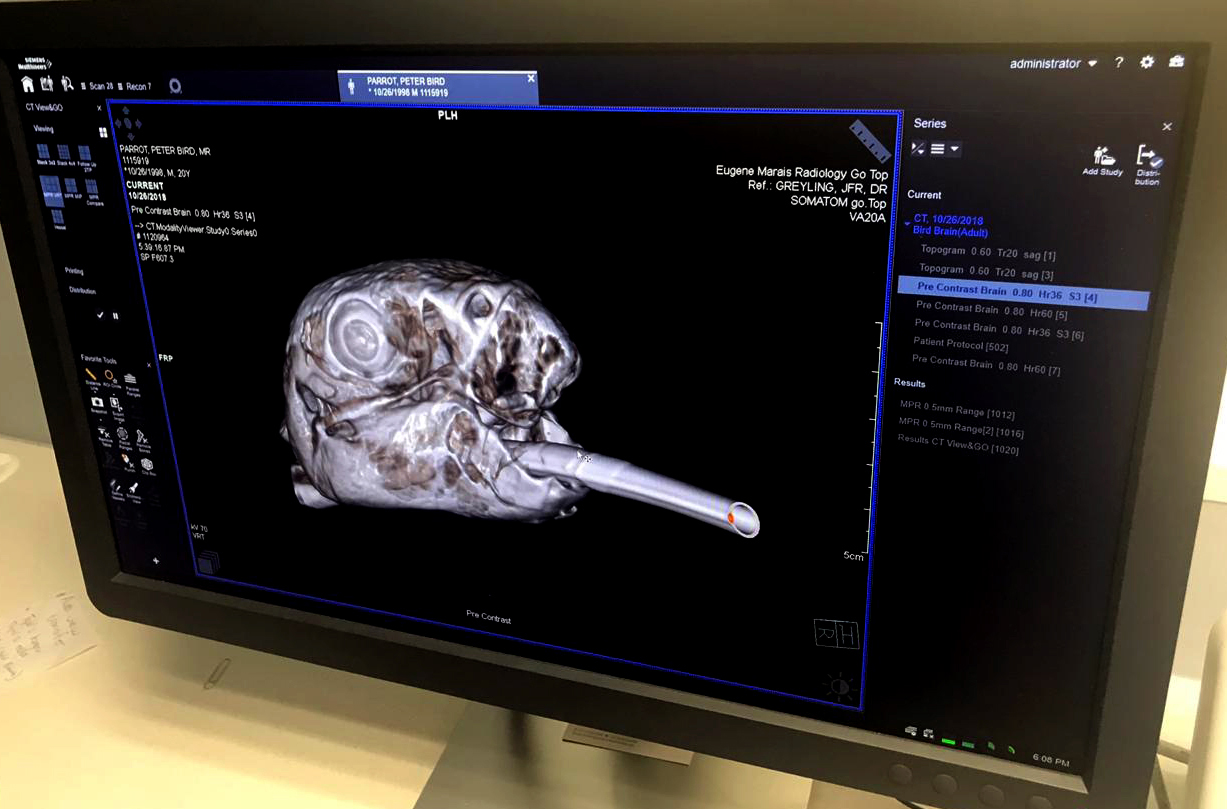 Professor Gerhard Steenkamp, a veterinary specialist in dentistry and maxillofacial surgery at the Faculty of Veterinary Science at the University of Pretoria, led a team to create and attach the new artificial beak. The team consisted out of a collaborative group of specialists from both the academic and industry sectors.

They took impressions of the residual beak and both the impression, and the CT scans were sent to us (BunnyCorp) to be processed. We did an initial 3D scan of the impression and the broken-off beak at the i2p lab at the Vaal University of Technology’s Science Park in Vanderbijlpark. Using the two 3D scans, combined with the CT scan, we were able to reconstruct the beak digitally. We then designed the new artificial beak that would follow the original’s shape and include an added back section to cover the residual beak and house the screws. 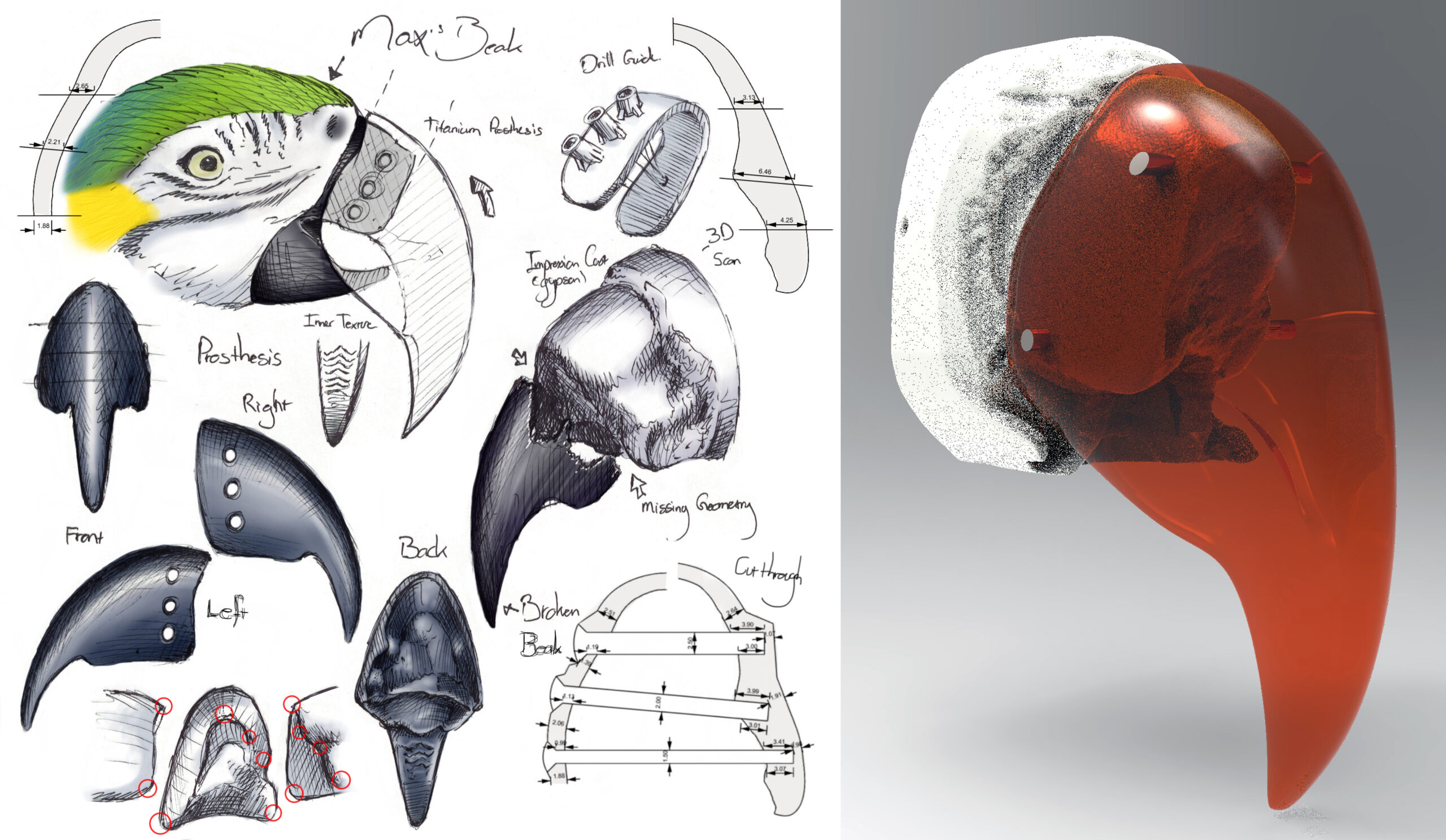 Once the CAD design was finished, samples were 3D printed in resin to test fitment, first, we could test it on the positive impression that was made, and then it was sent down to Max where they could do fitment tests to make sure it would still fit as the residual beak might also keep growing. This process had to be done several times during the duration of the project as the pandemic brought things to a halt for almost 2 years, and we wanted to ensure a perfect fit. 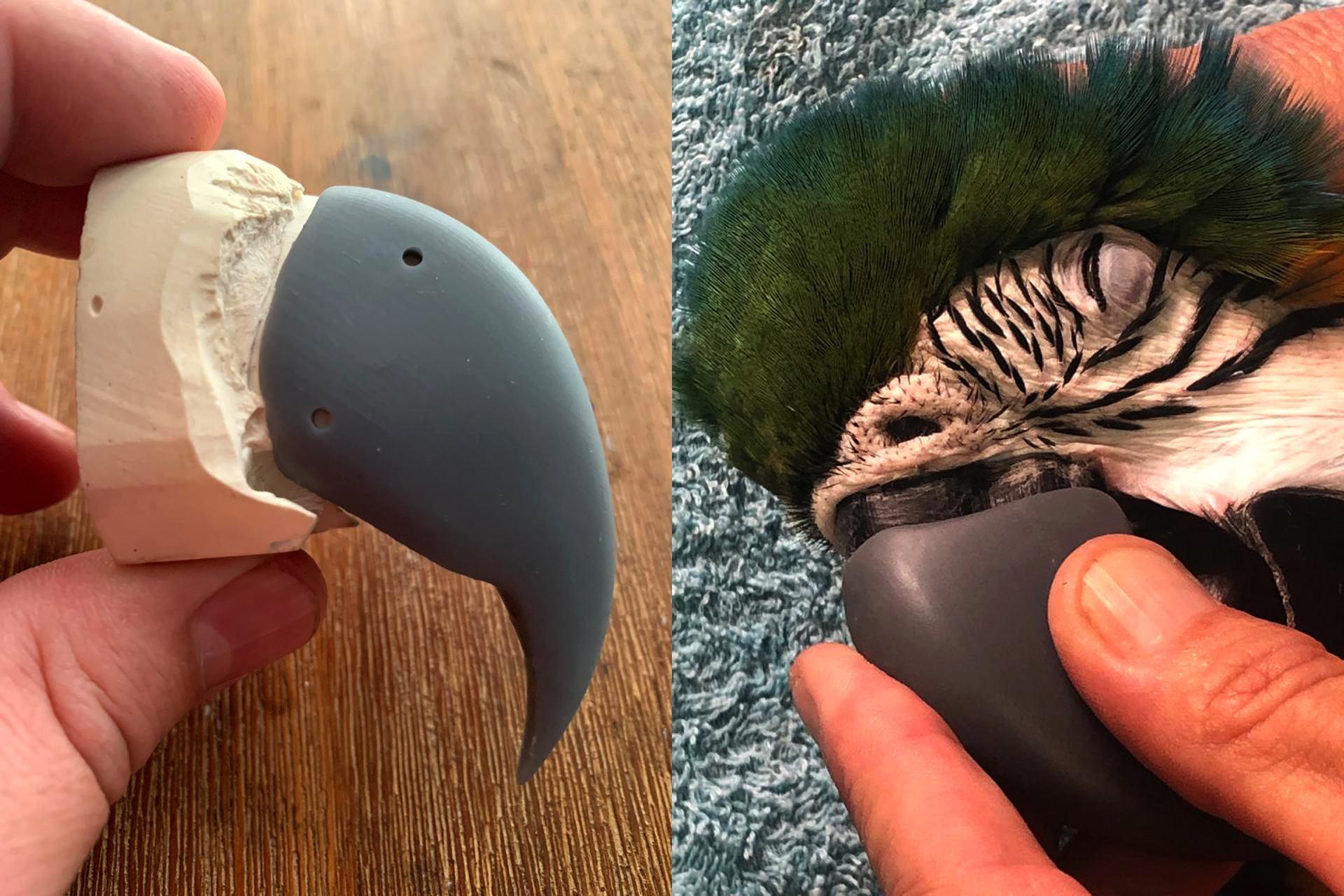 The next step was to produce the titanium version of the beak and the surgical drill guides in Nylon, as well as find the specific screws needed to do the operation. The Centre for Rapid Prototyping & Manufacturing (CRPM) at the Central University of Technology (CUT) in Bloemfontein was approached to do the 3D Printed titanium beak and guides, their experience in creating custom titanium implants for humans were valuable and they assisted on the surgical drill guide design. The Carl and Emily Fuchs Foundation helped to fund the manufacturing of the prosthesis while the National Department of Science and Innovation funded the MedAdd project, providing the latest in Additive Manufacturing (3D Printing) technology. The specialized locking screws were sponsored by Saspine, a Pretoria-based company that also works in the human orthopaedic environment. 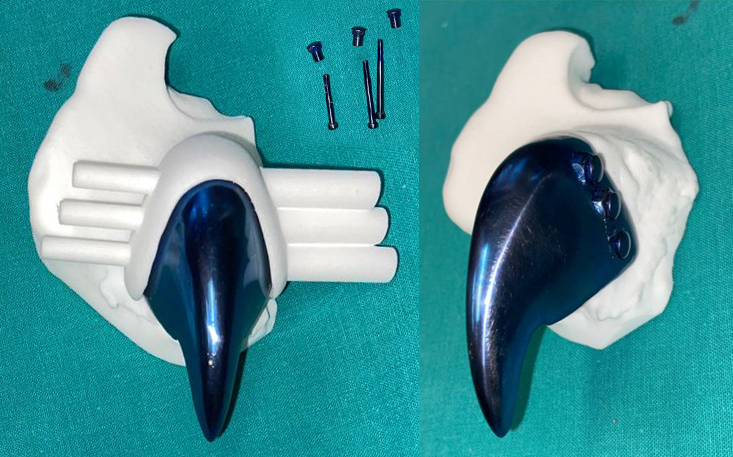 The surgery was conducted at the Robberg Veterinary Hospital with Dr Tindall administrating anaesthesia and Prof Steenkamp attaching the prosthesis while being assisted by Dr Cules van Heerden, a former UP professor and specialist prosthodontist. It lasted just over an hour and within a day of the surgery, Max was already eating solid pieces of food. Max will be under surveillance for a while to make sure there are no post-operation issues, he has returned home and is eating normally again, he has also gone back to relatively normal behaviour. 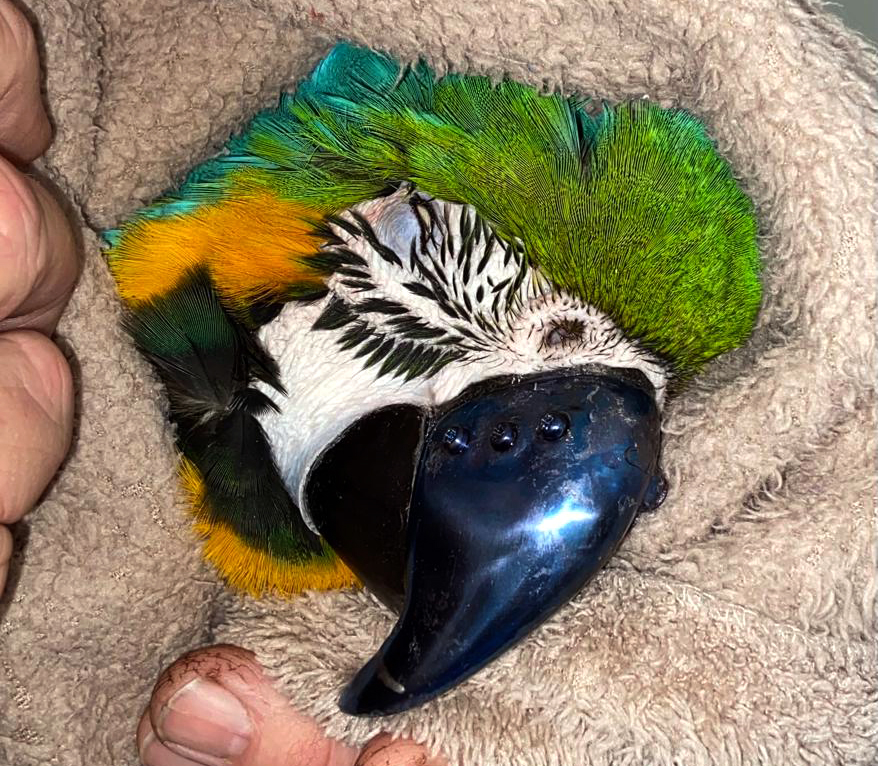 This ground-breaking surgery is believed to be the first of its kind in South Africa and wouldn’t have been possible without a great group of willing experts, collaborating to make this amazing operation a success. We would like to thank everyone that helped, those who sponsored money and time to make this possible!