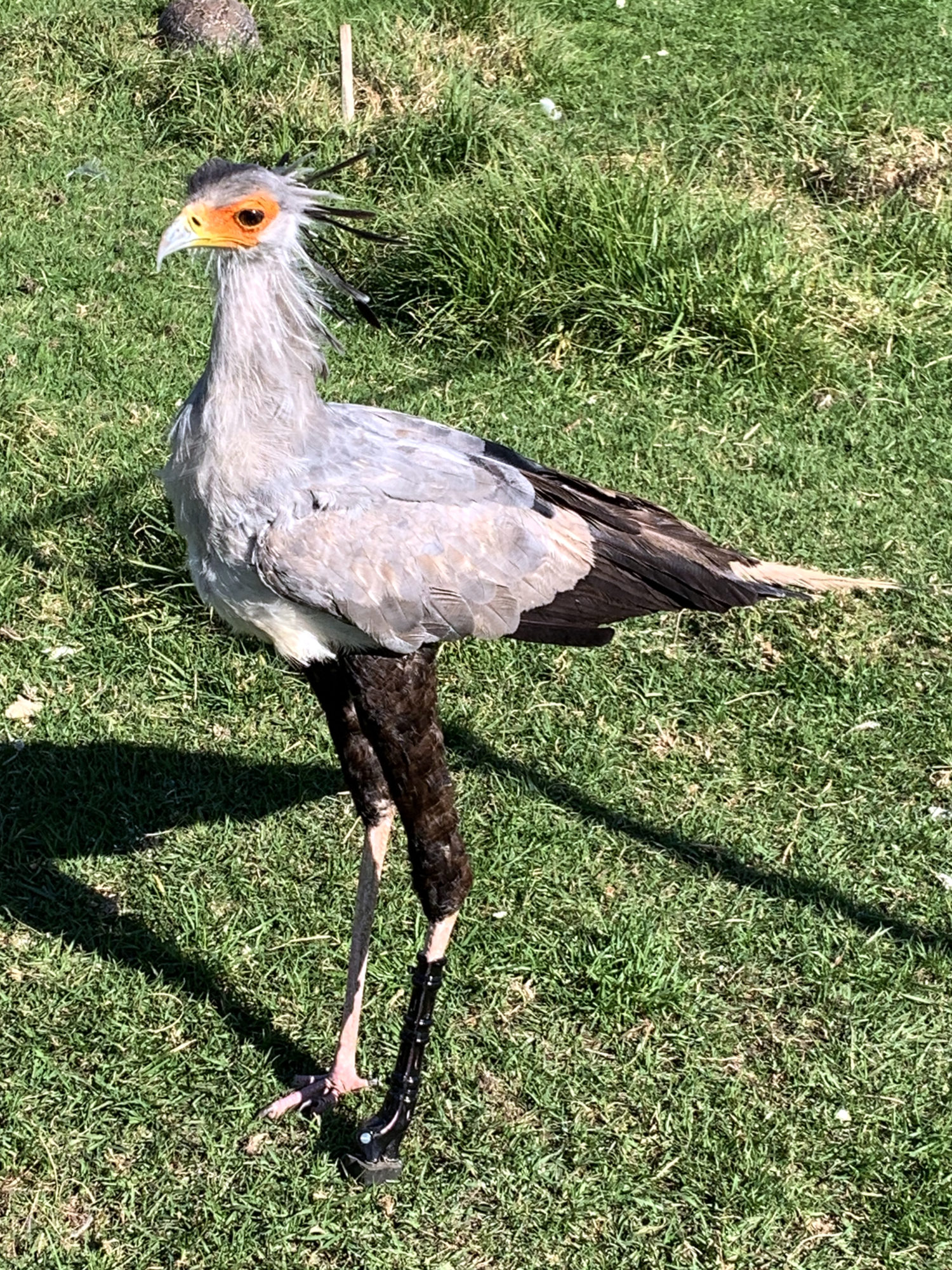 The Secretary Bird is one of the most interesting and beautiful wild birds found in South Africa, their exotic looks and hunting habits make them a sought after species to observe and thus they have also been crowned Bird of the Year 2019 by Bird Life South Africa. Our story is about a particular Secretary bird called Legs. She was found a few years ago starving with her foot trapped in a snare, she was rescued and brought to the Eagle Encounters Wildlife Rehabilitation and Conservation Centre based at the historic Spier Wine Farm in Stellenbosch, a non-profit organization established in 2001. Owner, Hank Chalmers, took Legs in nurtured her back to health, but the foot was badly damaged and could not be saved. Legs lost her foot and had to adapt, now walking on the stump with one leg shorter. 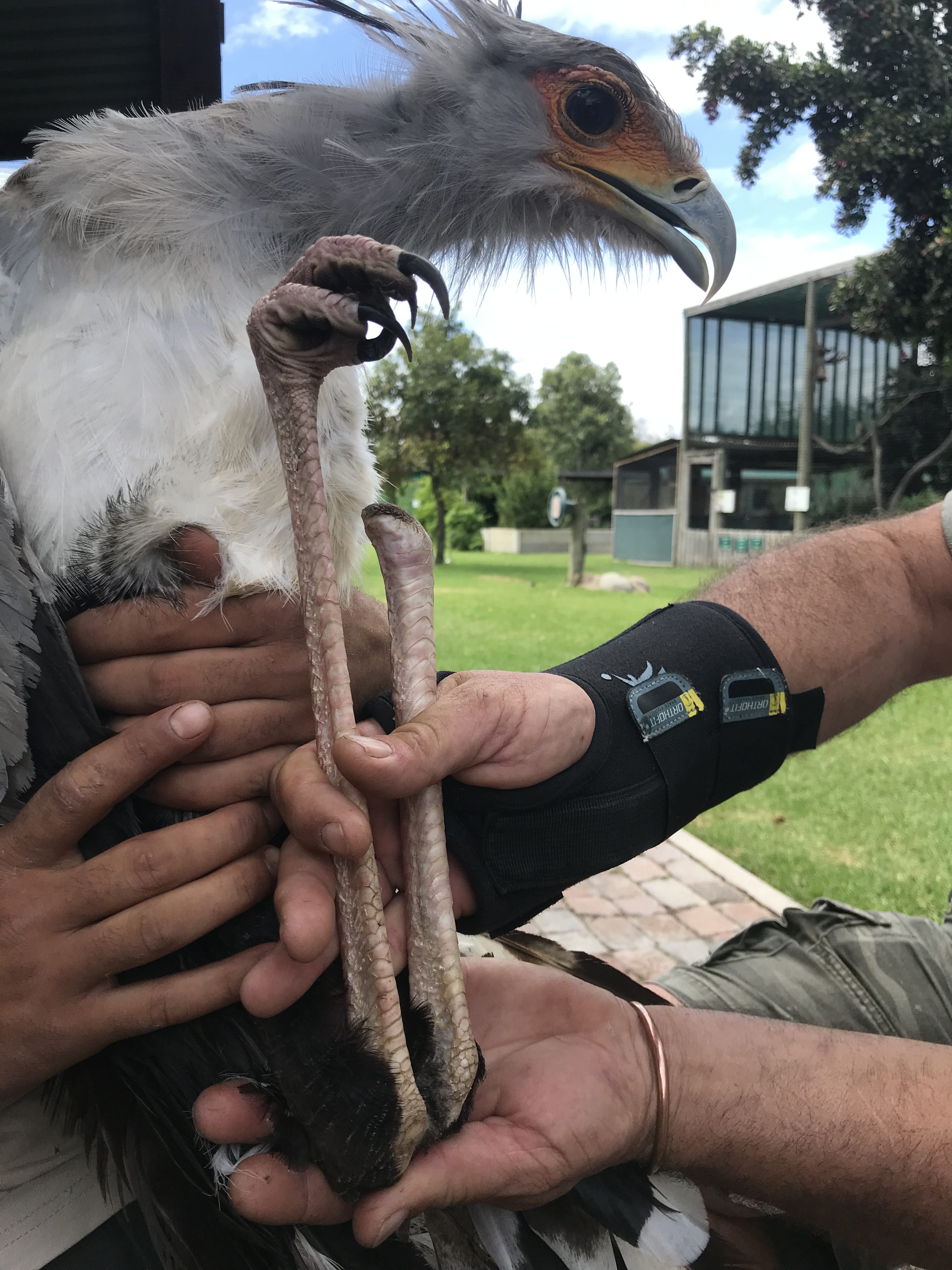 Last year on a visit to the facility, Dr. Coetzee the Beer, an Avian Veterinarian and owner of the Center for Avian, Reptiles and Exotics (CARE) in Klapmuts close by, realized that there might be something that can be done for Legs, since he started collaborating with us on other projects and knew we worked on all kinds of cases using 3D printing technologies.

A visit with us (BunnyCorp) was arranged and we took photos and measurements, they made a mold and positive cast from Legs’s stump and send it up to us. The 3D scan was done by the i2p lab situated at the Vaal University of Technologies Science Park in the Vaal and the scanned data was then used to recreate an accurate 3D model of the existing stump, making our job easier to design the new foot. 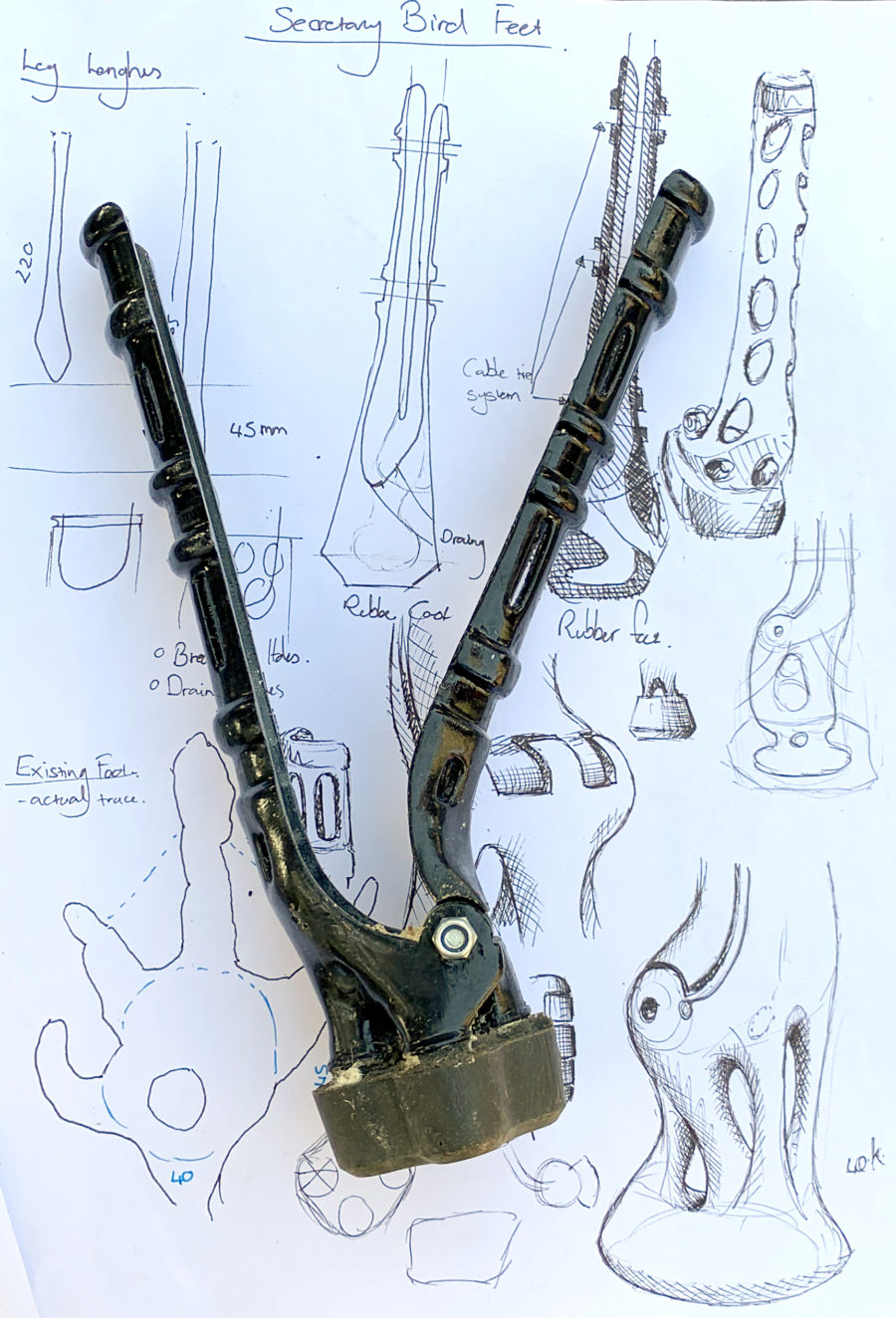 Concepts with the 3D print

With the Design, we discussed a few technicalities like adding padding inside the leg but eventually decided to try a direct fit with breathing and draining holes first. Two concerns were if the foot got wet, the padding would soak up water and retain it creating possible issues with the leg, with draining and air holes water cannot be retained and thus eliminate the issue, but we needed to make sure the leg would be checked on regular basis to see if there would be any negative effects from the direct fit. The second concern were with padding the leg would have to be removed and checked on a daily basis, which is disruptive to the bird but also dangerous for the staff as they give a mean kick so doing what we did would make it possible for Legs to wear the leg a few days before they had to check it again. On the foot we looked at doing something simple, a clawed foot would not be needed as Legs will not be able to return to the wild and thus we could avoid a complex foot that might have been very difficult to adapt to. 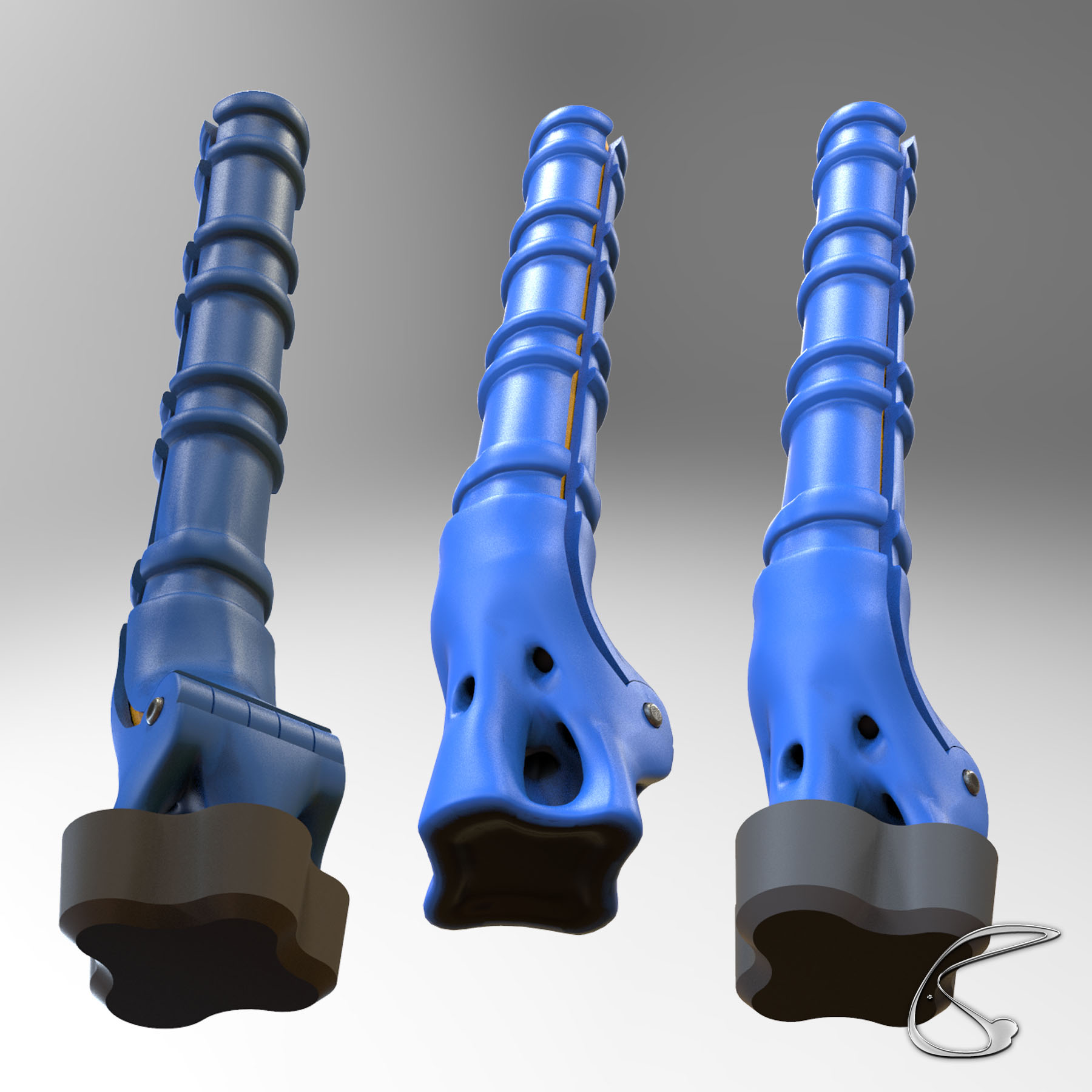 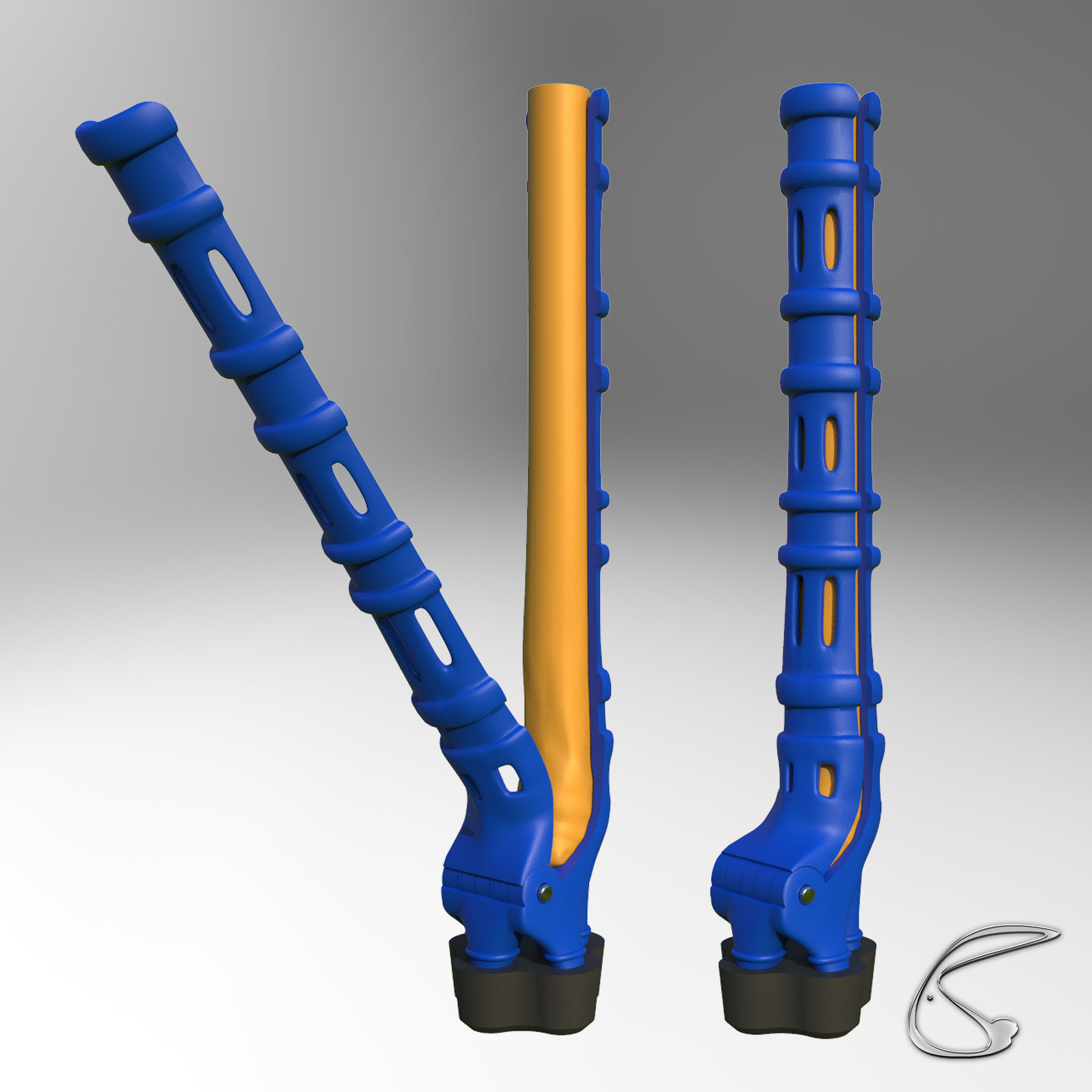 3D Renders of the designed leg, top showing the casting of the foot with draining holes and bottom the air holes

The 3D print was done by the guys from Promake International, specializing in Advanced Materials,  Medical Manufacturing and 3D printing in South Africa and the UK, they created the leg in Carbon Fibre and sent it to us for the final stage, a mold was also 3D printed and we cast a rubber foot over the end of the leg to give it a softer walk. 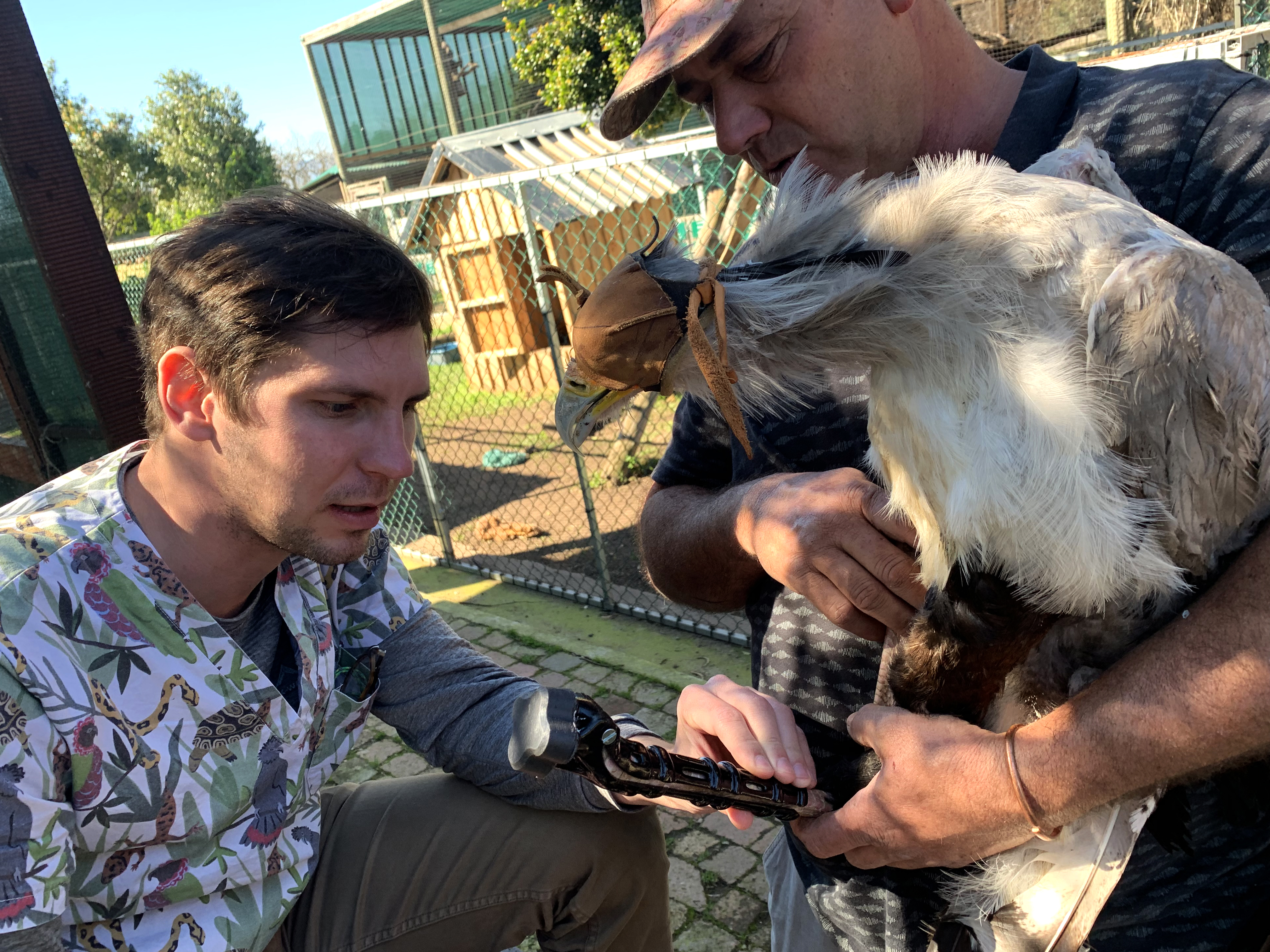 The prosthesis was flown down to Cape Town where we all came together at Eagle Encounters to test it on Legs. Legs weren’t sure what was going on but the moment she was put on the ground she was running and jumping, still limping slightly it would take a bit of time for her to get used to it and rebuild not just the muscles but also correct her posture. We gave it a few days and got together again to track her progress, she is already doing much better and even though the rehabilitation process will take some time, it seems like she will be ok. We will be checking up on her and making adjustments as needed so keep an eye out for more on Legs. Watch the Video below of Legs’s journey!

We would like to thank everyone involved that gave their time and sponsored what they could to make this happen. Please click on their names to follow links to their websites to see what else they all do!